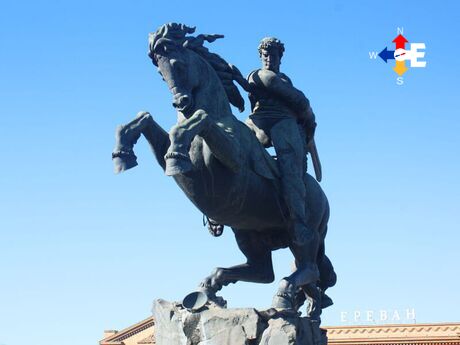 "This one is older than that" is how the name of an outstanding architectural and cultural monument is translated, and not just a monastery, but an academy known throughout medieval Armenia. Since the middle of the tenth century, one of the Satanic churches, Surb Amenaprkich, has become the cathedral of the entire Lori Kingdom. When located across the gorge from their younger brother, the monastery of Haghpat, being in continuous rivalry, the monks expressed it even in the name: Sanahin is really forty years older than Haghpat. And if you look at the place from the other side, then the "elder" lurked near the cliff of the picturesque canyon of the Debed River, over which a remarkable stone bridge with the name Sanainsky has been thrown in the town since 1192. There is a 10-kilometer trail between the famous Korean monasteries, walking along which a bonus will be a meeting with the Kayan-berd fortress and enjoying the view down to the Debed Canyon. Like Haghpat, Sanahin is an object from the UNESCO List.

In the vicinity of the city of Alaverdi, on a plateau surrounded by gorges, there has been a large monastery for more than 10 centuries, which became the spiritual and cultural center of the Lori Kingdom, and soon the whole of Armenia. The buildings of Haghpat are beautiful, besides they are quite well preserved. In addition, in Haghpat there is a rare khachkar "Amenaprkich" ("The Savior"), masterfully executed in 1273 - it depicts a crucifixion, which is not typical for the Armenian tradition. The Haghpat monastery is also known for the fact that having fallen into disgrace with the Georgian tsar, the famous Armenian poet and ashugh, the master of love lyrics Sayat-Nova, spent several years of his life in it. Some claim that he is also buried there, although it is believed that he died and rested in Tbilisi. Of course, the Haghpat Monastery, like many others in Armenia, is included in the List of UNESCO World Heritage Sites.

Free time. We recommend visiting Vernissage and Central Market. (The vernissage is open every day, but only a small part. The main most part works on Saturday-Sunday).

:
Yes
Hotel:
No
Room:
No
Breakfasts:
Yes, if the hotel is included
Lunches:
Yes
Number of meals:
6
Dinners:
No
Water in the car